In this post I'll give a quick way to get some basic web performance metrics using both JMeter and Gatling.

JMeter is a well known, open source, Java based tool for performance testing. It has a lot of features, and can be a little confusing at first. Scripts (aka Test Plans), are XML documents, edited using the JMeter GUI.  There are lots of options, supports a wide variety of protocols, and produces some OK looking graphs and reports.

Gatling is a lesser known tool, but I really like it. It's a Scala based tool, with scripts written in a nice DSL. While the scripts require some basic Scala, they are fairly easy to understand and modify. The output is a nice looking, interactive, HTML page.

Below are the basic metrics gathered by both JMeter and Gatling. If you are just starting performance testing, these might be a good starting point.

Latency – JMeter and Gatling define latency as the difference between time when request was sent and when response has started to be received, which includes the time the server spends processing the request.

Throughput – JMeter and Gatling define throughput as the number of requests per second. It is a measure of the load placed on the server during the test.

I've used the Oracle JDK 7 to run both JMeter and Gatling. The JDK can be downloaded here.


Setting up a simple test plan in JMeter is pretty straightforward. 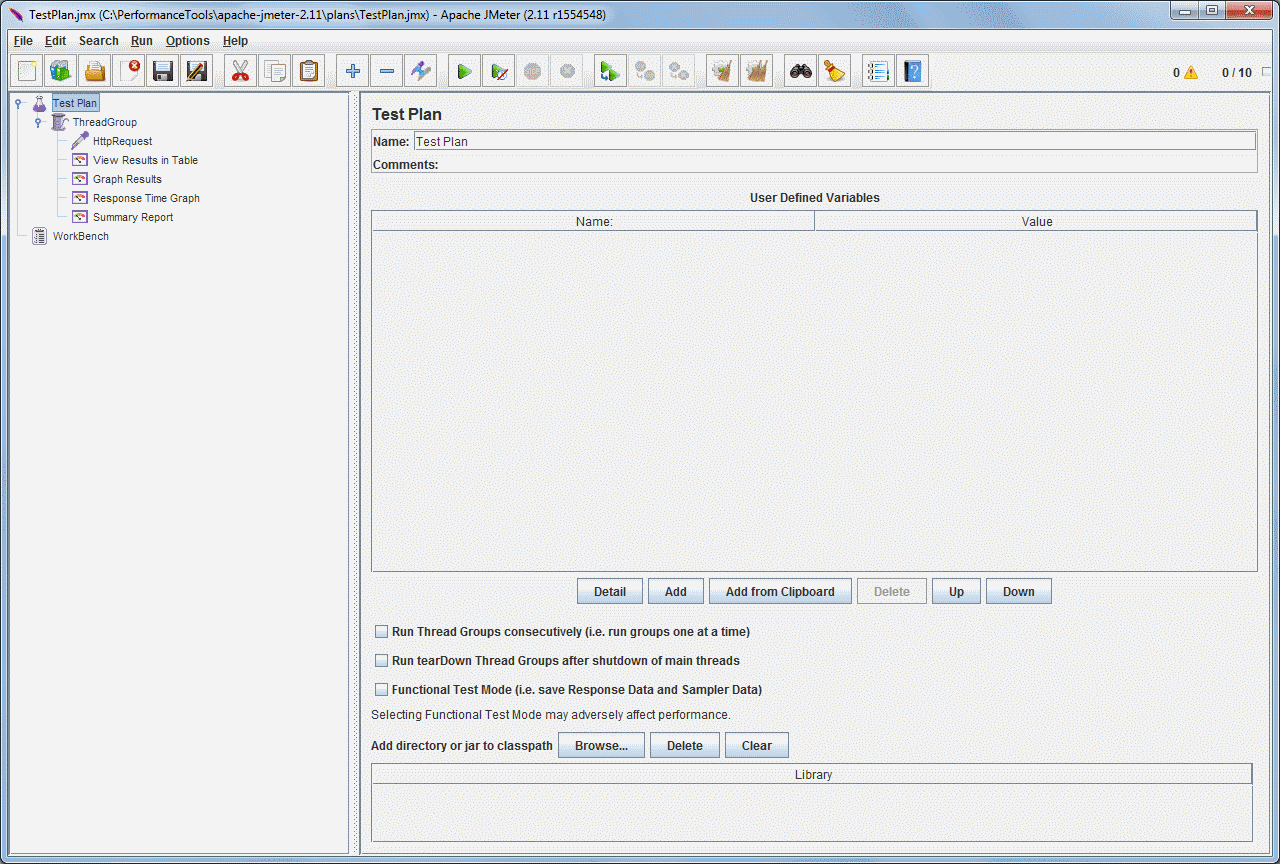 When the test plan is complete, run it by pressing the green run button in the toolbar.


There is no GUI for editing Gatling scripts, other than a plain old text editor or your IDE of choice.

The first time using Gatling, you might want to use the Gatling Recorder.

Here's a simple example of a Gatling script.It ramps up 10 users over 5 seconds, where each user loads http://blog.jerometerry.com 10 times each, for total of 100 page requests.


To run a Gatling script, you use the Gatling command in the Gatling\bin folder.  If you run Gatling without any options, it will prompt you to select the Simulation you want to run. However, if you know the package and class name, you can use the command "Gatling -s [package].[Class]". 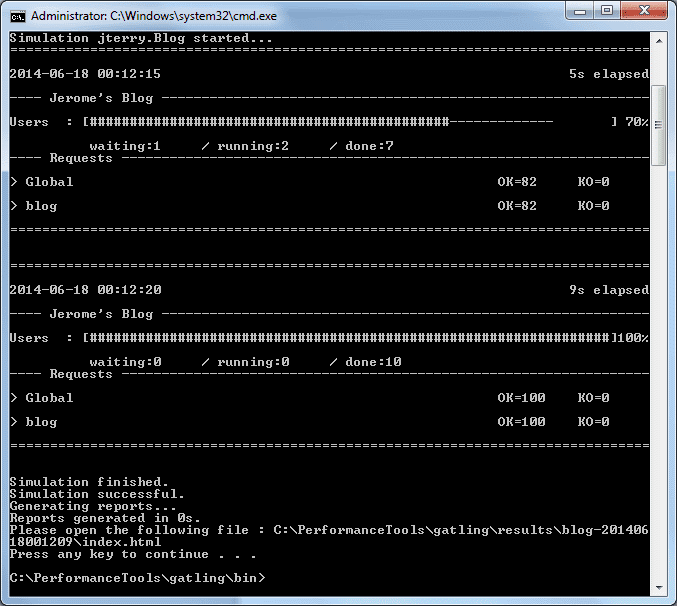 After running a simulation, the HTML results are saved to Gatling\results\ 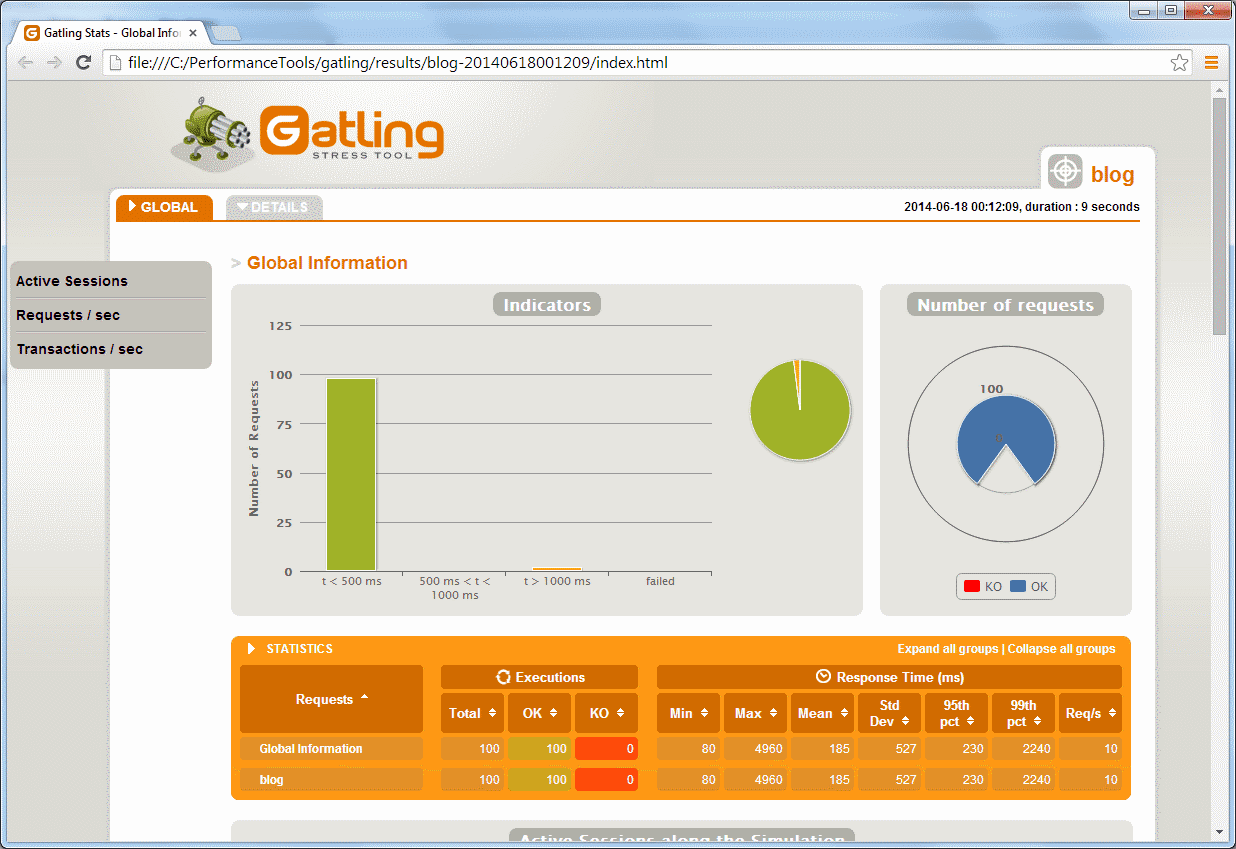 
This was a very basic guide to setting up and running JMeter and Gatling for the first time, assuming little or no previous experience with performance testing or these tools.

With a little bit of effort, it's not too much trouble to get some basic performance metrics on a single web page, including response time, latency and throughput.

Popular posts from this blog

December 20, 2016
Overview I've seen Brendan Gregg's talk on generating mixed-mode flame graphs  and I wanted to reproduce those flamegraphs for myself. Setting up the tools is a little bit of work, so I wanted to capture those steps. Check out the Java in Flames post on the Netflix blog for more information. I've created github repo ( github.com/jerometerry/perf )  that contains the scripts used to get this going, including a Vagrantfile, and JMeter Test Plan. Here's a flame graph I generated while applying load (via JMeter) to the basic arithmetic Tomcat sample application. All the green stacks are Java code, red stacks are kernel code, and yellow stacks are C++ code. The big green pile on the right is all the Tomcat Java code that's being run. Tools Here's the technologies I used (I'm writing this on a Mac). VirtualBox 5.1.12 Vagrant 1.9.1 bento/ubuntu-16.04 (kernel 4.4.0-38) Tomcat 7.0.68 JMeter 3.1 OpenJDK 8 1.8.111 linux-tools-4.4.0-38 linux-to
381 comments
Read more

June 29, 2014
Recently I needed to reproduce an Entity Framework deadlock issue. The test needed to run in NUnit, and involved firing off two separate threads. The trouble is that in NUnit, exceptions in threads terminate the parent thread without failing the test. For example, here's a test that starts two threads: the first thread simply logs to the console, while the other thread turfs an exception. What I expected was that this test should fail. However, the test actually passes. readonly ThreadStart[] delegates = { () => { Console.WriteLine("Nothing to see here"); }, () => { throw new InvalidOperationException("Blow up"); } }; [Test] public void SimpleMultiThreading() { var threads = delegates.Select(d => new Thread(d)).ToList(); foreach (var t in threads) { t.Start(); } foreach (var t in threads) { t.Join(); } } Peter Provost posted an article that describes how to make this test fail. It
264 comments
Read more